Air safety is a huge concern for everyone.  If someone mistakenly forgets their pepper spray keychain or other personal safety item it will be confiscated.  The TSA Blog shows some of the items that were confiscated at airports across the country.   After to seeing some of these items – you’ve got to wonder – What were they thinking!!!! 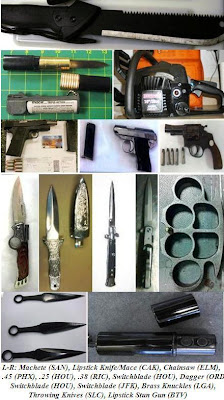 Gassed Up Chainsaw: Believe it or not, the chainsaw found at Elmira (ELM) was not the problem here. You can travel with your chainsaw as checked luggage, however, gassing it up is the problem. You know… Gas? Highly flammable liquid…
Lipstick Stun Gun: A 350,000 volt stun gun designed to look like lipstick was found in a passenger’s carry-on bag at Burlington (BTV). This particular lipstick is known to leave your lips looking stunning.
Lipstick Knife: A 4-ounce canister of mace along with a lipstick knife were found in a carry-on bag at Akron (CAK). I guess if you’re going for blood red lips, this is for you.
11” Machete: An 11” machete was discovered in a carry-on bag at San Diego (SAN).
More Throwing Knives: Once again, throwing knives were found (in the usual set of three) at Salt Lake City (SLC).
False Bottle Marked “Lotion”: Three bottles alarmed the Explosive Detection System in checked baggage at Philadelphia (PHL). After searching them, two bottles were shampoo and the other was a bottle marked “lotion” which had been cut in half and taped back together. Inside the bottle were two clear bags containing a green leafy substance. Green leafy lotion?
Walking On A Knife’s Edge?: A passenger at Miami (MIA) was concealing a steak knife with a 4” blade in their shoe. We found it…
Odd Turducken-Like Concealment Method: Officers at Charlotte (CLT) discovered a green leafy substance in a plastic bag, artfully concealed inside of a bag of sand and another plastic baggy containing a green leafy substance pushed down inside a piece of bread, stuffed inside a shoe. We’re not looking for drugs, but when something is packed like this and stuffed in a shoe, it’s going to look ominously odd.
Pepper Spray: A passenger at Boston (BOS) had two canisters of pepper spray in their carry-on bag. Pepper spray drifts after it’s been sprayed and if you happen to be close to it, you’ll get to experience the sting. Imagine this stuff going off in a close quarters pressurized cabin.
O Happy Dagger!: A 3” double-edged dagger was discovered in a carry-on bag at Chicago O’Hare (ORD).
Miscellaneous Prohibited Items: In addition to all of the other prohibited items we find weekly, our officers also found firearm components, ammunition, switchblades, batons, stun guns, knives, knives, and more knives, a realistic replica firearm, brass knuckles, a kubaton, and a baton.
Firearms: Our officers found 13 loaded firearms and 7 unloaded firearms in carry-on baggage since I posted last Friday. Here’s a rundown of the 20 firearms our officers kept off of airplanes this week:

You can travel with your firearms in checked baggage, but they must first be declared to the airline. You can go here for more details on how to properly travel with your firearms. We also look for explosives and bomb components as well, but thankfully those are extremely rare and we’re happy to keep it that way.
Unfortunately these sorts of occurrences are all too frequent which is why we talk about these finds. Sure, it’s great to share the things that our officers are finding, but at the same time, each time we find a dangerous item, the throughput is slowed down and a passenger that likely had no ill intent ends up with a citation or in some cases is even arrested. This is a friendly reminder to please leave these items at home. Just because we find a prohibited item on an individual does not mean they had bad intentions, that’s for the law enforcement officer to decide. In many cases, people simply forgot they had these items in their bag. That’s why it’s important to double check your luggage before you get to the airport.
Including checkpoint and checked baggage screening, TSA has 20 layers of security both visible and invisible to the public. Each one of these layers alone is capable of stopping a terrorist attack. In combination their security value is multiplied, creating a much stronger, formidable system. A terrorist who has to overcome multiple security layers in order to carry out an attack is more likely to be pre-empted, deterred, or to fail during the attempt.
Blogger Bob Burns
TSA Blog Team
It’s up to each of us to try and remember what we may have that is illegal to have in airports or other restricted weapon areas.  While the items may be perfectly legal – they aren’t legal to carry everywhere!!!!